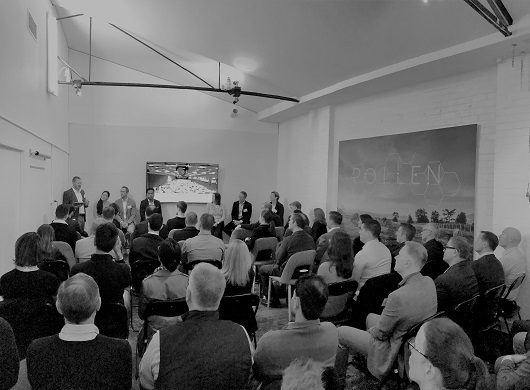 Preparing for the future: sustainability, digitisation, and an aging workforce

Supply chain, factories of the future, Industry 4.0, and an aging manufacturing workforce – all subjects that recently have started to have an impact on the food and beverage industry. It’s no longer enough to go after market share; processors and manufacturers in this space have to play the long game and ask themselves some questions about where they are heading, such as:

What does the future hold in the supply chain space? Do we need to adopt an Industry 4.0/Internet of Things (IoT) strategy? Does it even affect my business? What is a factory of the future?

Pollen recently hosted a networking event where a panel consisting of some of the brightest minds in the digitisation area came together to discuss some the issues that both multinationals and SMEs are facing within the sector.

Linda Crowe, head of supply chain at wines and spirits producer Diageo, knows that the company has to get onboard with sustainability initiatives –but at what cost?

“We had our global supply and procurement director out recently and we talked about sustainability,” she said. “And the biggest message he landed was that we don’t have a choice anymore, but we need to find a way to be sustainable without impacting costs. Or, if it’s going to be more costly, then we have to pull it out of the profit and loss (P&L) somewhere else. We definitely need to start looking within to get ahead of the trends and do it in an intelligent way.”

And while some talk the talk, as James Magee, CEO of Operations Feedback Systems (OFS), explained, when it comes to walking the walk, some baulk.

“From my time working in Visy’s recycling department, there were many brand owners and organisations that came in and said they wanted to go down the path of sustainability,” he said. “They wanted to promote it, but of course it came at a higher cost. When that resolve was tested, in many cases, neither the brand or consumers, despite outwardly promoting it and testing at shelf, decided they would go for the cheaper option. It’s interesting to hear Diageo’s approach. That is a breath of fresh air because a lot of companies will chase profits over sustainability.”

And while it is easy to be cynical about costs over profit, at least one person on the panel was not willing to compromise when it came to making sure her company was minimising its impact on the environment, even if it affects the bottom line. Diem Fuggersberger is the CEO of Berger Ingredients and food company Coco & Lucas, and her values in her home life cross over into her professional life.

“I have certain values in my personal life, so I have to make sure those things are the same in my business,” she said. “When I started Coco & Lucas I wanted sustainability, but it has hurt my profitability by at least $250,000 a year. All the packaging used in Coco & Lucas is biodegradable. Instead of paying $0.12 for a plastic food tray, I’m paying $0.28 for a biodegradable one. Initially my family wondered why I was paying all this extra money but I was determined to be the first national brand that doesn’t have plastic going into the earth. I felt it was my responsibility for me to have a biodegradable tray.”

The executive general manager at CHEP Australia, Lis Mannes, brought up the issue of waste in the food and beverage industry. Mannes was involved in companies that have had a large sustainability arm, yet the infrastructure within some of them has not been mature enough to handle the amounts of waste being created.

“We are in a lag position where we do not have, as a country, the infrastructure to handle the amount of waste we create,” she said.

To take it one step further, not only do companies have to think about what side effects waste will have on the environment, but there is a generation of younger workers coming through that are interested in their employer’s stance on the environment.

“I did an induction recently for some new employees, and one of my slides goes, ‘Why CHEP?’” said Mannes. “As I went around the room I asked people why they joined us. I would say over half of the room actually cited [the company’s attitude towards] sustainability as one of the core reasons that they joined the company. I don’t think I would have had that answer 10 years ago.”

Another point up for discussion was the role of technology in the supply chain, something that manufacturers and distributors in the food and beverage space need to take into consideration as digitisation starts to take hold. There were duelling trains of thought with this aspect of business in general – digitise completely now, or do it gradually.

Pollen Technology director, Oliver North believed that because technology is ever changing, there is a conundrum, which is that nobody knows what these changes will entail when it comes to supply chain.

“Nobody can predict what is going to happen,” said North. “The only thing we know is that it is going to change. The question being asked was, ‘How do we as a business adopt these changes?’ And when it comes to technology the first thing you should be looking at is where the pain points are in your supply chain.

“You need to look internally at a business and understand the areas where we have a problem, and where we can use technology to solve it. Then you look at the market and understand what technologies can help us there, and what technologies will fix that need.”
Mannes also delved into a few issues that need addressing within the Australian food and beverage industry – distance that products need to travel; legacy plant and machinery that needs upgrading; the need to diversify outputs during production; and an aging manufacturing workforce.

“When I look around the infrastructure in the food and beverage industry in Australia, there is a lot of legacy assets that exist, and one of the challenges of our economy is the distances versus the population that we are trying to service,” she said.

Mannes also touched on Australia being in a unique situation whereby the nature of the country – its size and the supply chain distances travelled – creates natural constraints that have to be considered. According to Mannes, some start-ups are often scared off by the scale of economies that exist in the country and the possibility of making a business work where they are servicing so many locations.

“To establish a fresh sandwich factory in Sydney, and to service the country, you just can’t do it, because you can’t get it with a three-day shelf-life to Perth,” she said.

Then there is the issue of the condition of the some of the plant and machinery in some factories, as well as the aging population of workers in the food and beverage processing and manufacturing industries.

“We have factories in many of our food industries that have these legacy assets that are looking tired,” she said. “Then, you have the generation of workers coming through who don’t want to work in them. I’m sure I’m not the only one who has been in endless discussions about aging employment and aging workforces and what that is going to do the economy, because we have a generation of people coming through who don’t want to work with our aged assets. But we have an economy that makes it really hard to have a business case to keep industry here. I don’t know what the solution for that is.

Generationally, as we start to adopt Industry 4.0 in the appropriate places, we will gradually get a younger segment coming though that do want to work in those kinds of environments.”

Eastwood then touched on workforce issues and how automation would affect factories of the future. In 2018, a Swiss think tank, The World Economic Forum, released a statement that stipulated that half the work force could be replaced by robots by 2025. However, it also said that robots could create twice as many jobs as currently exist now.

This was backed up by productivity expert Ishan Galapathy who said we should be working smarter, not harder. “If we can build the capability of our frontlines leaders to problem solve, they will be using the skills that won’t go away – like empathy and courage,” he said.

The next topic on the agenda was about working in a factory of the future from an employee’s point of view. They would be ripe for the gig economy, said Magee, with gig referring to independent workers who contract their services out for short-term jobs.
“I would say that in the future an opportunity exists for manufacturing employees to share in the gig economy,” he said. “Why couldn’t there be a star rating where I’m an employee, or a hired gun, who can work in any factory. If you only need me for five hours, you don’t have to pay me to sweep the floor to fill out the contract if I finish early. I’ll walk across the road and go and work at another place for few more hours.”

A similar scenario could be played out for excess factory floor space. Diageo already thought ahead before it built its new distribution centre, according to Crowe. It intentionally built the factory bigger than it needed because it was taking into account the growth of the company. For about four months of the year it runs at full capacity, while in the other months it runs at about 50 to 60 per cent. It can rent out the extra space to, as Crowe puts it, “sweat the asset to make it profitable”.

The final point of the discussion, made by Eastwood, was about food and beverage processors and manufacturers taking on digitisation – don’t rush into it, he said.

“I don’t think you have to worry too much about being left behind because it takes time,” he said. “You won’t change the world tomorrow, but you do need to start thinking about it, because some companies are clearly starting to nudge ahead. There is no one that is miles ahead at the moment. Think about it. Take your time. And get it right. It doesn’t cost millions.”